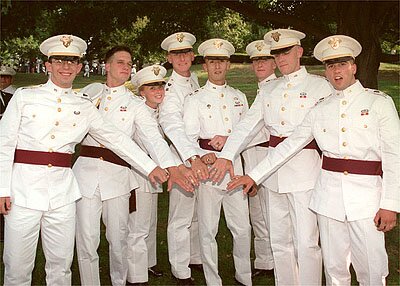 There is a long tradition related to military academy rings among graduates who have attended our nation’s many military academies. The custom, dating back to West Point in 1835, is a significant milestone in the life of a senior cadet. The design of the ring is chosen by the cadet during their senior year. Some choose to use pieces of family members’ rings. There is a tradition at West Point, where alumni donate their old rings, which are added to a smelting pot. A new set of rings are made from this batch.

The term ‘ringknocker’ developed from the rumor that some graduates would rap their ring on a hard surface to show their superiority. Some think the term came because graduates would tap their ring during a discussion, and all other cadets would then have to back up his/her point of view. (We should probably note here that we have talked to non military service academy veterans who have indicated they never witnessed any ring knocking and that they do not believe there is any basis to this “urban legend.”) ‘Ringknocker’ can sometimes have a bad connotation, but the tradition behind the military academy rings is still strong at the military service academy institutions.